American Watercolor at the Philadelphia Museum of Art 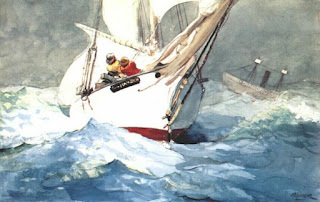 Between 1860 and 1925, the American art world was changed forever with the enthusiastic response to the medium of Watercolors moving from the past time of cultured ladies to a respected art form. Though many would dabble and make a name for themselves in this area, no one has had quite the impact on Watercolors as Winslow Homer and John Singer Sargent.  Right now at the Philadelphia Museum of Art, visitors can experience an amazing collection of art during American Watercolor in the Age of Homer and Sargent through May 14.

The exhibit takes a chronological look at the Watercolor movement starting with the founding of the American Watercolor Society in 1866.  Emerging artists at this time included names such as William T. Richards, Thomas Moran, and Homer himself who continued to be dedicated to the medium while others such as George Inness and Thomas Eakins would contribute to its popularity over the years.  A new generation emerged in later years with Childe Hassam and Maurice Prendergast carrying the torch between earlier artists and the later influencers of Edward Hopper, John Singer Sargent, and many others. 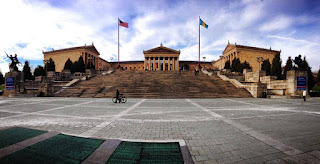 Some of the highlights of the exhibit included a walk through a "Salon" which gave a homelike feel with a parlor setup as well as booklets to reference instead plaques posted on the walls.  Another section we loved was the picture to picture comparison of Homer and Sargent's individual takes on similar locations and subjects.  After an examination, visitors were even given the opportunity to vote on who they believed to the better Watercolor artist (we may have voted for Sargent, but it looked pretty close!).

American Watercolor in the Age of Homer and Sargent will be at the
Philadelphia Museum of Art through May 14th.
Tickets are available at the door or online at philamuseum.org.

American Watercolor in the Age of Homer and Sargent 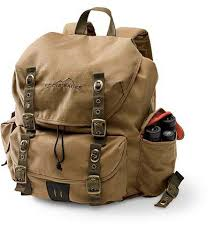 Posted by Daily Vacationer at 5:45 PM