I come from a family where holiday traditions are absolutely sacred.  We do the same thing year after year - changing a little and making allowances for now being a family of grown ups with our own children.  My husband comes from a family where they never seem to know what is happening the day of the holiday and will remember fondly traditions from when they were kids, but that is all in the past now.  Needless to say, my husband and I often disagree on the importance of keeping up with traditions from childhood.
However, we do agree on the desire to create holiday traditions for our own little family.  We have a already discussed and planned various things from both families (and just things that we think we'd enjoy) that we want to introduce to our kids (so that someday they can argue with their spouse that this is the way that their family does the holidays!). 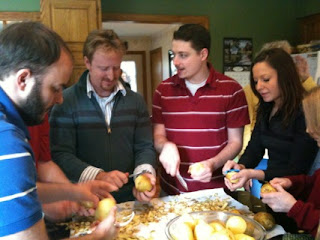 I love to hear what traditions people have with their families and what traditions they have incorporated as family dynamics have changed over the years.  At Thanksgiving, which my parents have hosted for years, my family would always sit in the kitchen cracking pistachio nuts for the cheese spread appetizers while watching the Macy's Thanksgiving Day Parade - taking turns working on something else for the day or taking a shower.  Usually someone would have to call everyone back in to watch Santa make his appearance at the end of the parade (which is particularly funny since we've never believed in Santa Claus yet find it important to see him in the parade).
As the day goes on, family arrives and we all descend on the appetizer table as if there will be no huge meal later on.  With the new addition of my grandparents and uncle and aunt from another side of the family in the past few years, we now have the football game on the television in one room.  The kitchen is crowded with people cooking their meal contributions that they didn't already cook at home (though the majority of the meal is prepared by my mom).  At some point we all gather around to peel potatoes and have a peeling contest (which my uncle has always won).  Then the turkey makes its grand appearance to be carved.  For years my aunt my was saddled with the task of carving the turkey, and we turned the whole thing into a "turkey wrestling" event as we all gathered round to heckle her.  These days, much to my aunt's delight, my grandfather carves the turkey.


We then gather at a big long table where our places have already been marked by place holders.  The place holders are homemade and have each Thanksgiving that the person has attended at the house recorded on the back.  We pass the food round and round the table and all eat our fill to the sound of various table discussions and Christmas music.
At this point new traditions for my own family unit take the place of old traditions.  Usually we would then go for a walk (no matter the weather), singing Christmas carols and working up an appetite for dessert.  However, this is the point in the day when my husband and I leave my family and head over to my husband's family for, lo and behold, Thanksgiving dinner!  It seems be in a different place every year and at a different time, but eventually everyone arrives and it's always a good time despite the lack of organization.
From here we launch into a weekend of cutting down Christmas trees, making a stop at an orchard near the tree farm for apple cider doughnuts, baking Christmas cookies, and helping my parents to set up their tree and house for Christmas.  It's a non-stop festive whirlwind that I love and look forward to every year.  This year I'm excited to have our daughter experience it all for the first time.
I hope that you have as enjoyable a Thanksgiving as I know that I will be having.  Savor your family traditions and don't be afraid to make room for new ones or change old ones that just don't work anymore.  Make sure that at some point during the day, everyone is included in at least one of these traditions.  Don't leave the kids out because they are too young or stick grandma in a corner because she is too old - those are the people to whom the traditions will probably mean the most in the end.
Happy Thanksgiving!!
Posted by Daily Vacationer at 7:51 AM