If You're Happy and You Know It

Today I ran the Color Run in Philadelphia with my husband and our older daughter.  The basic idea of a color run is to wear a lot of white and travel the distance of 3.1 miles and get blasted every now and then with powdered color (made of cornstarch) that covers your white clothing making the ending look like a very messy mob of rainbow people.  The Color Run boasts itself to be "The Happiest 5K on the Planet", and I have to admit that we were having so much fun that we made pretty good time and barely felt a thing. 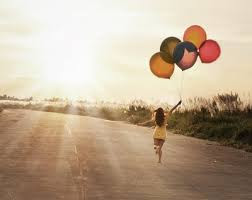 However, there were definitely people there who were not having the happiest of times.  There was a boy near us who arrived feeling ill and spent twenty minutes attempting to throw up into a plastic bag before the race so he could still run.  There was the group of people who had been separated from the rest of their team and were frantically trying to find each other. And, hilariously, there were a couple people with the temporary tatoos on their faces that said simply HAPPY, and they looked like they wanted to punch someone.
There's a similar sensation when you visit "The Happiest Place on Earth": Disney World.  I've been there a few times as an adult and had a complete blast, but there's always someone nearby arguing or having a meltdown or just not enjoying themselves.  Apparently even when you run "happy" 5Ks and visit "happy" places, "happiness" is not guaranteed, and often it is the things that we expect to make us the most happy that let us down the most because we just expected too much.
What you begin to discover in life is that happiness is really an emotion that you have to bring with you.  No one can make you happy if you are dead set against having a good time.  If you are only happy when things are going perfect or your doing some elaborate big thing, then don't expect to be happy very often.  Life is never perfect, and there's an awful lot of regular life between the big elaborate plans.  But the imperfect, the unpredictable, and the regular can be incredible! You just have to approach the ordinary with the right mindset.
I recently read this great quote from Brene Brown in an interview where she was asked what she knows now about happiness that she didn't know at eighteen,  Her answer: "I don't have to chase extraordinary moments to find happiness.  If I'm paying attention, it's right in front of me."  Exactly!  Don't spend your life thinking if you just did something else or had something else that it would bring you happiness.  Life doesn't work like that.  Happiness is something that only you can bring to a moment, not the other way around.  And then your face will surely show it. ;) 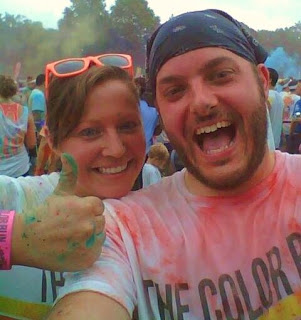